West Ferris students ‘Give a Shirt’ 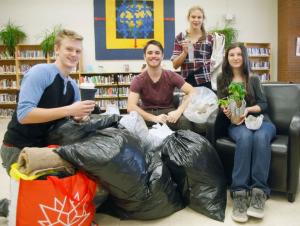 Students at West Ferris Secondary School have been busy this week breathing new life into old items that would otherwise be thrown away.

The students have been collecting old clothes and other unwanted textiles for re-wear and reuse, while raising awareness about issues such as consumption and waste.

It’s all part of the I Give a Shirt Challenge, an initiative of the Recycling Council of Ontario and Value Village which is open to high schools in Ontario and British Columbia and offers prizes for collection, community engagement and social media efforts.

“It takes 700 gallons of water to make one shirt,” says Riley Geisler, one of the student leaders who’s been helping to spread the word and encourage participation throughout the school.

It’s facts like that, picked up through his research, that Geisler has been passing along while visiting classrooms to help inform the school and promote the initiative, which is running in junction with Waste Reduction Week in Canada.

It’s an important issue, especially for young people, he says, pointing to a recent UN climate change report that’s been in the news, indicating humanity has 12 years to limit global warming to 1.5 C or significantly worsen the risks of drought, floods, extreme heat and poverty.

Geisler highlights another challenge factoid – that 95 per cent of the 9.5 million tons of clothing sent to landfills in North America every year could be reused or recycled. And he suggests more people would be inclined to reuse and recycle if such information was more widely known.

The students, however, aren’t only collecting old clothes for donation to a nonprofit partnered with Value Village. They’re also re-purposing items and reaching out to community groups.

Jessica Feick, who heads up library services at West Ferris, has been co-ordinating the initiative.

She says the school will host a clothing swap and that students, including those in the school’s toward independent living and learning (TILL) program, have been using some of the textiles to create items such as bookmarks, coffee sleeves and bags.

For more about the challenge, see https://www.giveashirtcanada.com