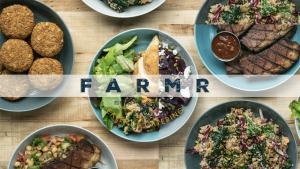 Chef inspired, casual, farm-to-table eatery. We believe in making everything from scratch and only using the best ingredients directly from local farms. Our chefs bring fine-dining techniques to inspire everyday eating for dine-in, take out or delivery. Our menu is ideal for gluten free, vegetarian / vegan, allergies and other modern diets.

Farm'r was a concept we thought of 2 years ago after realizing there was a gap in the market for more locally minded meals, crafted by chefs but in a casual setting at an attainable price point. After a few pop-ups under various names, extensive food and concept testing, we landed with Farm'r. We hope you'll enjoy it as much as we did developing the concept and menu!

From CBC article How can we keep takeout containers out of the trash? This restaurateur has a tasty idea

At Farm'r, before customers pick their protein and sides, they have to decide whether they're eating lunch on a plate or taking their food to go in one of the restaurant's reusable containers. Customers buy the containers for $4 and then return them for a full refund the next time they're in. The plastic takeout containers are washed and sanitized before every use.

The concept is owner Kyle Webster's way of taking sustainable food to the next level.

"Takeout is the fastest growing segment in the restaurant business," said Webster. "We found that a lot of biodegradable containers weren't getting disposed of properly and ended up in landfill … Same with the recyclable ones."

"Unfortunately we're only recycling just over 10 percent of all the plastics we're actually creating," said St.Godard.

The City of Toronto collects more than 490,000 tonnes of waste annually from residents and other customers. And that doesn't include the many businesses, office towers and highrise condos that have to hire private trash disposal services.

About 18 per cent of what the city collects is blue bin material. Exactly how much of that is single-use items is unclear, those aren't tracked. But given the growing takeout industry the city says the numbers are significant.

Toronto is launching the second phase of public consultations Tuesday on reducing single-use and takeaway items. The hope is to reduce people's dependence on convenience items like paper cups or plastic containers.

The City of Toronto says charging people or businesses extra for opting for single-use containers is an option that's going to be discussed during the consultation process. Residents have until Nov. 4 to submit their thoughts on single-use items.

People will need viable alternatives and St. Godard says having industry bear the full cost isn't realistic; customers should be required to dish out for more sustainable options as well.

"Consumers can vote with their chequebooks … You want to support businesses that are innovating," said St. Godard.

"Businesses should always be looking at alternatives and experimenting to make the industry more sustainable."

For Webster, his reusable to-go container has been a small success. Farm'r started offering the option in August and quickly ordered more after selling out in the first week. Every time a customer returns one, they're washed and sanitized on site.

"We have about 50 now in circulation," said Webster. "We give the customer 50 cents off their meal when they use our container or even if they use their own."

The hope is to expand the service by getting other restaurants on board.

"This way, we can make it even more accessible for people by dropping the price point ... making the environmentally friendly choice become easier," said Webster.

Read the full article at cbc.ca