Cleanfarms has a decade of experience innovating in agricultural sustainability

With a decade of experience under its belt and three decades of a voluntary plastic packaging stewardship program to draw on, Canada’s Cleanfarms employs voluntary and regulated extended producer responsibility (EPR) to operate successful packaging and product collection programs for agricultural communities across the country.  As a non-profit industry stewardship organization, Cleanfarms operates innovative recycling and safe disposal programs that help farmers incorporate environmental sustainability in farm management. One such program is the Saskatchewan grain bag recycling program which is projected to recover more than 1,900 tonnes of grain bags this year alone.

In a first-of-its-kind agricultural recycling program in Saskatchewan, Cleanfarms has set up a province-wide program to collect and recycle used grain bags and it’s proving to be a huge success. Three quarters of the way through 2019, Saskatchewan farmers already have brought back 46% more grain bags for recycling this year than they did in all of 2018.

Grain bags are large plastic sleeves that farmers use to store newly harvested cereal grains. Used largely in the prairie provinces, the bags vary in size from 9 by 200 feet to 14 by 500 feet. Farmers with large acreages can use dozens of bags in a season. Until the Cleanfarms program got underway at the beginning of 2018, empty, used grain bags, representing thousands of tonnes of plastic, went to landfill or were left in a corner of the farm.

Cleanfarms is a non-profit industry stewardship organization established 10 years ago to help Canadian farmers recycle or properly dispose of waste agricultural plastic and other waste materials generated on farms.

So far this year, Saskatchewan farmers have turned in 1,847 tonnes of used, empty grain bags for recycling. During the whole of 2018, the first year of the program, the total collected for recycling was 1,265 tonnes.

“With the harvest season nearly over, we are expecting that we’ll see the year end with a very successful recycling program for grain bags in Saskatchewan,” predicted Cleanfarms’ General Manager, Barry Friesen. “We have Saskatchewan farmers to thank for that. We are very grateful they are getting on board so enthusiastically with this recycling program.”

Across the province, 34 municipalities and businesses are set up as Cleanfarms collection locations that accept grain bags. They are supported by Cleanfarms’ Western Region Program Coordinator, Tammy Shields. Based in Moose Jaw, Shields has been involved in grain bag recycling since pilots began in 2010.

Under an operating contract with the Alberta Plastics Recycling Group, Cleanfarms has just started a pilot recycling program for grain bags and twine in Alberta with 20 sites throughout the province set to collect the materials.

During the recycling process, recovered grain bags are made into new products such as plastic bags.

The recycling program for grain bags in Saskatchewan was established under The Agricultural Packaging Product Waste Stewardship Regulations (2016). It is the only government-regulated extended producer responsibility program of its kind in Canada. Similar to many other of Saskatchewan’s stewardship programs for products such as tires, electronics, paint and oil containers, the regulation transfers financial responsibility for proper disposal from the taxpayer to businesses that supply grain bags into the market.

Cleanfarms has developed a series of successful programs to recover and recycle or properly dispose of plastic ag waste and other farm waste materials helping to keep Canadian farms clean, including: 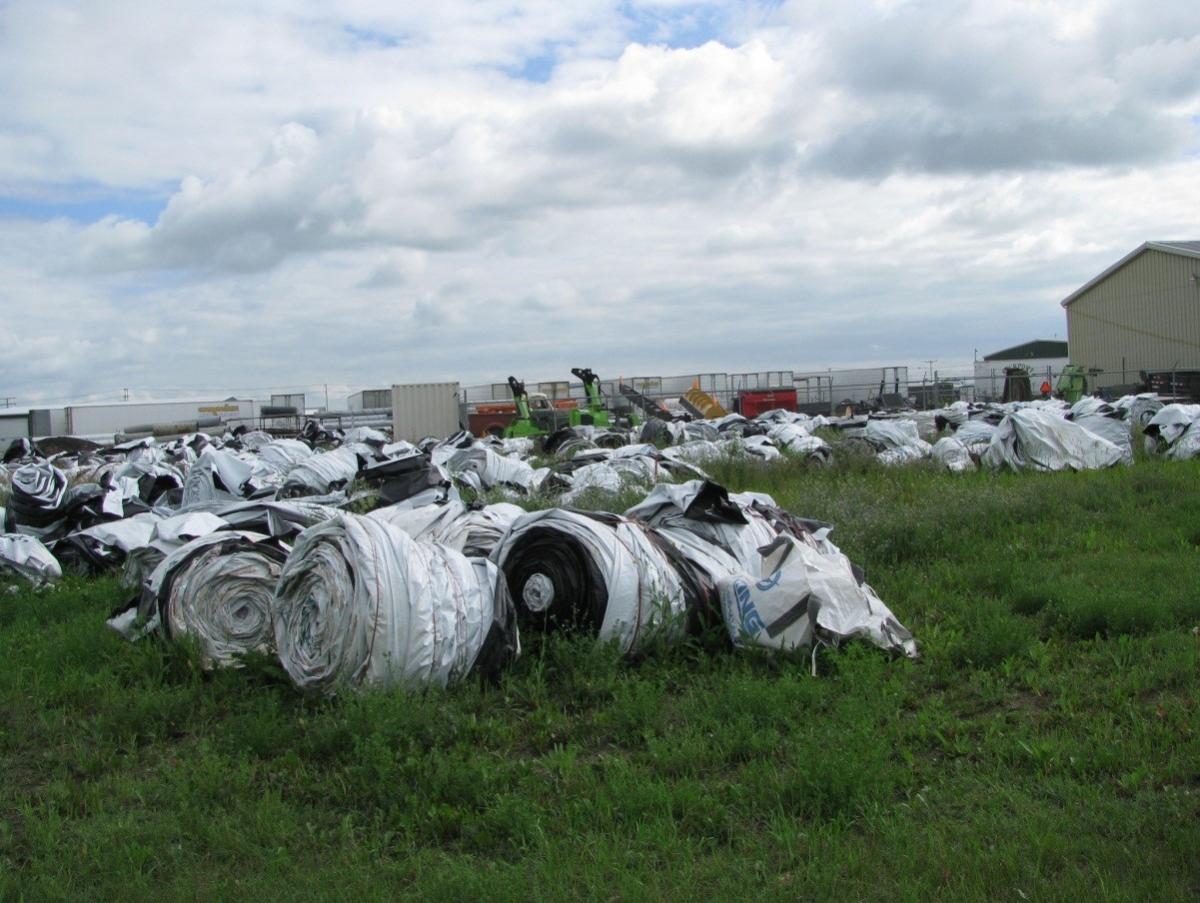