Home » How This Town Produces No Trash

How This Town Produces No Trash 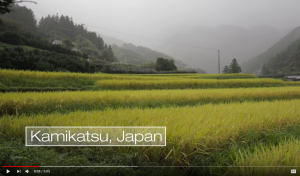 In 2003, the local government in Kamikatsu, Japan decided to require that all residents comply with a new, rigorous recycling program - perhaps the most rigorous in the world.

Since then, the town composts, recycles, or reuses 80% of its garbage. It may not technically be 100% zero waste, as the remaining 20% goes into the landfill, but it's a remarkable achievement for an entire community, in such a short amount of time. The impacts have been positive - cutting costs for the community drastically, as well as improving the conditions of the lush and beautiful environment that surrounds the town in Southeast Japan.

Residents must wash and sort virtually anything that is non-compostable in their household before bringing it to the recycling sorting center. Shampoo bottles, caps, cans, razors, styrofoam meat trays, water bottles...the list goes on and on (literally) into 34 categories. At the sorting center, labels on each bin indicate the recycling process for that specific item - how it will be recycled, what it will become, and how much that process can cost (or even earn). It's an education process for the consumer.

All kitchen scraps must be composted at home, as the town has no garbage trucks or collectors.

And as for other items, reuse is heavily encouraged.  According to Akira Sakano, Deputy Chief Officer at Zero Waste Academy in Kamikatsu, the town has a kuru-kuru shop where residents can bring in used items and take things home for free. There is also a kuru-kuru factory, where local women make bags and clothes out of discarded items.

At first, it was difficult to be come accustomed to the new rules. "It can be a pain, and at first we were opposed to the idea," says resident, Hatsue Katayama. "If you get used to it, it becomes normal."

Now, it's even being noticed within Kamikatsu's businesses. The first zero-waste brewery has opened in Kamikatsu, called Rise and Win Brewery. The brewery itself is constructed of reused materials and environmentally friendly finishes. By 2020, Kamikatsu hopes to be 100% zero waste, with no use of landfills, and to forge connections with other like-minded communities in the world, spreading the practice of zero-waste.