A giftless Christmas? How some families are cutting waste one present at a time | Waste Reduction Week in Canada
Skip to main content

Home » A giftless Christmas? How some families are cutting waste one present at a time

A giftless Christmas? How some families are cutting waste one present at a time 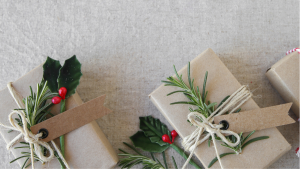 Christmas celebrations generate a lot of trash. In their quest to reduce waste, some Canadian families are cutting back on more than just wrapping paper and disposable dishware — they're also cutting back on presents.

Those that do it say that's key to reducing waste. They acknowledge it's a challenge in a culture where Christmas is often about lavish buying and spending and can lead to conflicts with extended family. But they say it also comes with rewards — including a more fun, less stressful and more meaningful holiday.

According to the nonprofit group Zero Waste Canada, the average Canadian family throws out 25 to 45 per cent more garbage than usual over the holidays.

Viviana Ramirez-Luna, the group's Newfoundland and Labrador representative, says the holidays are a good time to think about cutting back on waste because "everyone is in the mood of buying, giving, getting, receiving, and … buying is when we really need to stop and think."

In order to reduce waste, she says, the moment of purchase is when we need to think about whether we need something, whether there are alternatives and whether there's too much packaging.

With that in mind, Ramirez-Luna, who lives in St. John's, avoids buying physical gifts for her own family, including her three-year-old son Nathan.

"My husband keeps saying, 'What are we going to give him?' And I say, 'Nothing. He doesn't need anything.'"

Instead, she proposed giving her son a gift certificate to a trampoline park.

Similarly, she has encouraged her extended family to give experiences. To her husband's family in Lewisporte, N.L., she gives gift certificates for workshops on making traditional foods, and to her own family in Colombia, she gives things like concert tickets. She has also convinced them to do a Secret Santa draw so each person only has to give a gift to one other person instead of buying gifts for everyone.

Read the full and original article at CBC.ca